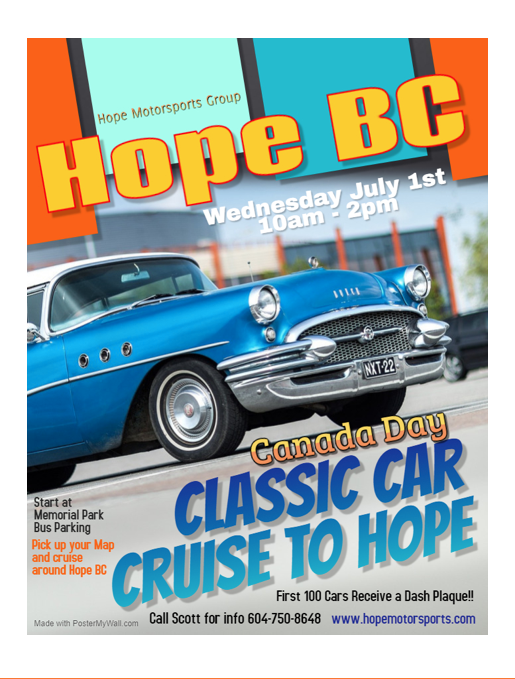 Due to the current pandemic of Covid-19, the Hope Motorsports Canada Day Car Show in the park has been cancelled.

We are encouraging those with classic cars or Motorcycles to enjoy Canada Day
with a drive out to beautiful Hope BC!

Open to all classes.

We will stage vehicles in groups of 8-10 at the Bus stop at Memorial Park where we will give you a Map and a Visitor Guide and send you off on a pre-determined route to explore Hope BC and all it has to offer. The route we will set you on is about 20km long and should take about 45 minutes to cruise. The route will be well marked with arrows and the symbol “CC” for Canada Day Cruise.

The first 100 cars will receive a dash plaque.

No pre-registration required but we are kindly accepting donations that we will put towards our local Hope Search and Rescue Group.

The Bus Stop can be found on 3rd Avenue between Park Street and Commission Street.

The Hope Motorsports Group felt this was the best way to celebrate Canada Day in Hope BC. Residents will surely be enjoying your cars as you cruise through their neighbourhood.

For more information reach out to Scott at 604-750-8648 or email at info@hopemotorsports.com

We hope to see you enjoy our Canada Day Cruise! 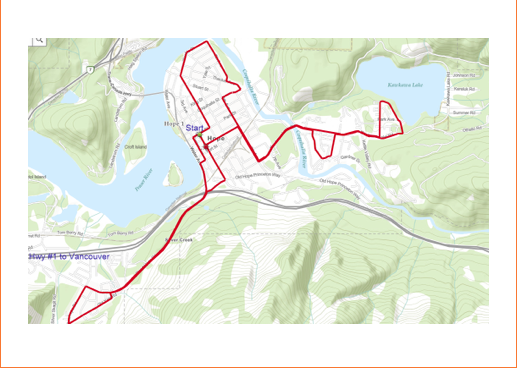 Earth Day in Hope, BC

For the past 50 years, an event called Earth Day has been celebrated on April 22 throughout the world. This year Hope, BC’s event will unfortunately have to be postponed. Click Earthday.hope-bc.ca for further details. 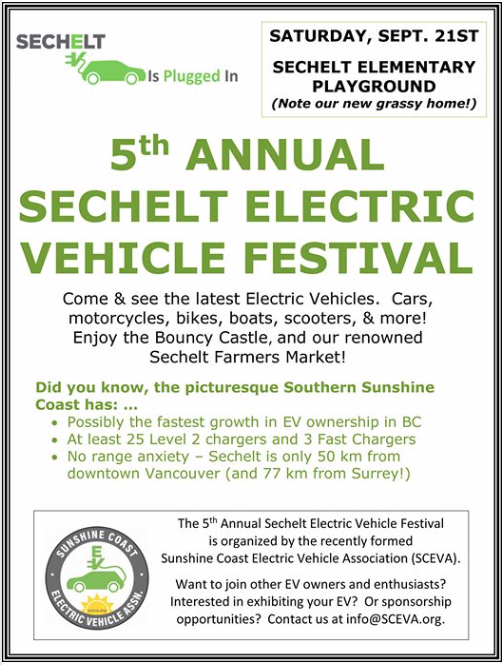 Those purchasing a Tesla in BC are permitted to use an owners referral code and earn a promotional benefit under BC law (free supercharging credits) and permitted by the Vehicle Sales Authority of BC.

Those credits to those owners that were inadvertently removed will been returned.

Referral awards remain ineligible for residents of BC along with Ohio and Virginia in the USA. Most throughout the rest of North America allow it. If you feel this is wrong we encourage you to write to your MLA and Ministry of Transport.

1. Auto repair shops go away. A gasoline engine has 20,000 individual parts. An electrical engine has 20. Electric cars are sold with lifetime guarantees and are only repaired by dealers. It takes only 10 minutes to remove and replace an electric engine. Faulty electric engines are not repaired in the dealership but are sent to a regional repair shop that repairs them with robots. Essentially, if your electric “Check Motor” light comes on, you simply drive up to what looks like a car wash. Your car is towed through while you have a cup of coffee and out comes your car with a new engine.

3.. All major auto manufacturers have already designated 5-6billion dollars each to start building new plants that only build electric cars.

5. Homes produce and store more electrical energy during the day and then they use and will sell it back to the grid. The grid stores it and dispenses it to industries that are high electricity users.

A baby of today will only see personal cars in museums.

——————–
1. The FUTURE is approaching faster than one can handle! In 1998, Kodak had 170,000 employees and sold 85% of all photo paper worldwide. Within just a few years, their business model disappeared and they went bankrupt.

What happened to Kodak will happen in a lot of industries in the next 5-10years and, most people won’t see it coming.

Did you think in 1998 that 3years later you would never take pictures on film again?

Yet digital cameras were invented in 1975. The first ones only had 10,000 pixels, but followed Moore’s law. So as with all exponential technologies, it was a disappointment for a time, before it became way superior and became mainstream in only a few short years. It will now happen again (but much faster) with Artificial Intelligence, health, autonomous and electric cars, education, 3Dprinting, agriculture and jobs.

Welcome to the 4thIndustrial Revolution.

Welcome to the Exponential Age!!

2. Software will disrupt most traditional industries in the next 5-10years.

3. Uber is just a software tool, they don’t own any cars, yet they are now the biggest taxi company in the world.

4. Airbnb is now the biggest hotel company in the world, although they don’t own any properties.

5. Artificial Intelligence: Computers become exponentially better in understanding the world. This year, a computer beat the best Go-player in the world, 10 years earlier than expected.

6. In the U.S., young lawyers already don’t get jobs. Because of IBM’s Watson, you can get legal advice (so far for more or less basic stuff) within seconds, with 90% accuracy compared with 70% accuracy when done by humans. So, if you study law, stop immediately. There will be 90% fewer lawyers in the future, only omniscient specialists will remain.

7. Facebook now has a pattern recognition software that can recognize faces better than humans. In 2030, computers will become more intelligent than humans.

8. Autonomous cars: In 2018 the first self-driving cars will appear for the public. Around 2020, the complete industry will start to be disrupted. You don’t want to own a car anymore. You will call a car with your phone, it will show up at your location and drive you to your destination. You will not need to park it you only pay for the driven distance and can be productive while driving. The very young children of todaywill never get a driver’s license and will never own a car.

8A. It will change the cities, because we will need 90-95% fewer cars for that. We can transform former parking spaces into parks.

1.2 million people die each year in car accidents worldwide. We now have one accident every 60,000 mi (100,000 km), with autonomous driving that will drop to 1 accident in 6 million miles (10 million km). That will save a million lives worldwide each year.

8C. Many engineers from Volkswagen and Audi are completely terrified of Tesla

9. Insurance companies will have massive trouble because, without accidents, the insurance will become 100x cheaper. Their car insurance business model will disappear.

10. Real estate will change. Because if you can work while you commute, people will move further away to live in a more beautiful neighborhood..

11. Electric cars will become mainstream about 2020. Cities will be less noisy because all new cars will run on electricity.

12. Electricity will become incredibly cheap and clean: Solar production has been on an exponential curve for 30 years, but you can now see the burgeoning impact.

13. Last year, more solar energy was installed worldwide than fossil. Energy companies are desperately trying to limit access to the grid to prevent competition from home solar installations, but that simply cannot continue… technology will take care of that strategy.

14. With cheap electricity comes cheap and abundant water. Desalination of salt water now only needs 2kWh per cubic meter (@ 0..25 cents). We don’t have scarce water in most places, we only have scarce drinking water. Imagine what will be possible if anyone can have as much clean water as he wants, for nearly no cost.

15. Health: The Tricorder X price will be announced this year. There are companies who will build a medical device (called the “Tricorder” from Star Trek) that works with your phone, which takes your retina scan, your blood sample and you breath into it. It then analyses 54 bio-markers that will identify nearly any disease. It will be cheap, so in a few years everyone on this planet will have access to world class medical analysis, nearly for free.

17. Some spare airplane parts are already 3Dprinted in remote airports. The space station now has a printer that eliminates the need for the large amount of spare parts they used to have in the past.

18. At the end of this year, new smart phones will have 3Dscanning possibilities. You can then 3D scan your feet and print your perfect shoe at home.

19. In China, they already 3Dprinted and built a complete 6-story office building. By 2027, 10% of everything that’s being produced will be 3D printed.

20. Business opportunities: If you think of a niche you want to go in, first ask yourself: “In the future, do I think we will have that?” And, if the answer is yes, how can you make that happen sooner?

20A. If it doesn’t work with your phone, forget the idea. Any idea designed for success in the 20th century is doomed to failure in the 21st century.

20B. Work: 70-80% of jobs will disappear in the next 20 years. There will be a lot of new jobs, but it is not clear if there will be enough new jobs in such a short time.

21. Agriculture: There will be a $100 agricultural robot in the future. Farmers in 3rd world countries can then become managers of their field instead of working all day on their fields.

2. Aeroponics will need much less water. The first Petri dish produced veal is now available and will be cheaper than cow produced veal in 2018. Right now, 30% of all agricultural surfaces is used for cows. Imagine if we don’t need that space anymore.

23. There are several startups who will bring insect protein to the market shortly. It contains more protein than meat. It will be labeled as “alternative protein source” (because most people still reject the idea of eating insects).